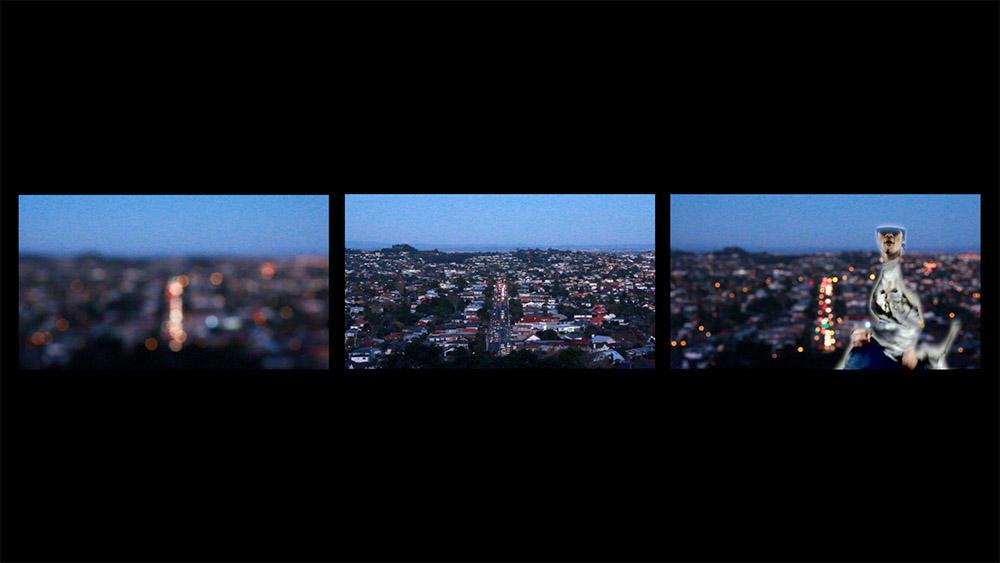 Featured in this exhibition were two related Janet Lilo works now in the Chartwell Collection: Beneath the Radar and Right of Way. Both three channel video works feature imagery of local significance to Lilo who is known for her mixed media installations, photomontages and video works. She was also commissioned to create a new installation for Shout Whisper Wail! - The Chartwell Show in 2017.

"Why do we use ‘Moana Oceania’ and not ‘Pacific’? The name Pacific was given to this region by a Portuguese explorer almost 500 years ago and, with its transliteration Pasifika, is still used. In Aotearoa New Zealand and other island nations, such as the Cook Islands, Hawai’i, Sāmoa and Tonga, ‘moana’ means ocean or vast space. For this reason it has relevance for Aotearoa New Zealand – an island nation with ancestral links to the wider Moana. Oceania is also a foreign name, first popularised in the early 19th century, and is today a common alternative for Pacific because it suggests a sea of islands connected to each other. The phrase ‘Moana Oceania’, then, empowers and privileges Indigenous perspectives, which are strongly connected to Aotearoa and share roots with the wider Moana Oceania.

Paul Tangata, of Cook Islands heritage, and Teuane Tibbo, of Sāmoan heritage, were the first Moana Oceania artists to exhibit frequently in Auckland. In the generations since their pioneering work, this city has become home to many more artists and their creativity has become one this region’s emblems and helped shaped our region’s identity. Seeing Moana Oceania presents key works by artists who affirm their diverse Moana Oceania cultures within contemporary art practice. These artists look forward in time to a culturally rich and diverse Aotearoa New Zealand."