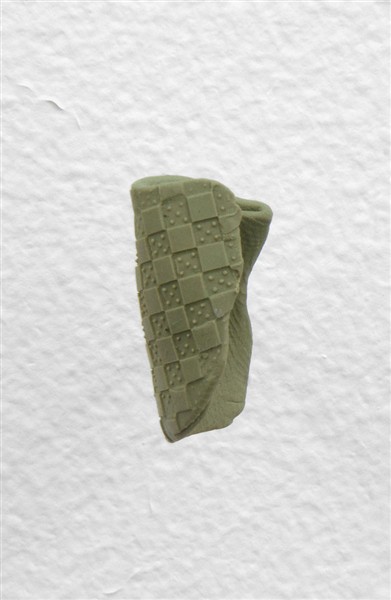 Matt Hinkley’s miniature, delicate works made from polymer clay challenge preconceived notions of sculpture and heighten awareness of how we look at and engage with works of art. We live in an age where entertainment spectacles strive for the sublime and the gargantuan, where movies and concerts offer immersive and hypersensory experiences; and to be inspired and wowed, we must experience something bigger and better than what was previously offered. Hinkley’s sculptures are very modest in scale and hold traces of the artist’s presence, creating a quiet mood within the chaos of everyday experience.

For the 19th Biennale of Sydney, You Imagine What You Desire (2014), the artist’s sculptures were installed in the expansive space of the Industrial Precinct on Cockatoo Island. In the same place at the previous Biennale, Peter Robinson’s enormous polystyrene chain links filled the space; artistic director Juliana Engberg created a humorous juxtaposition of scale and challenged expectations surrounding the display of artworks within particular spaces. Amid that vast and visually busy location, Hinkley’s sculptures were like strange debris or the remnants of another event. The necessity to actively discover the artwork is an interesting test of patience and perception. Pinned to the walls like insects in a pseudoscientific collection, the works invite viewers to closely inspect their complex and intricate surfaces. The small size negates the amount of information an object can carry. Hinkley’s sculptures are a circuitboard of organic, repetitive marks that narrate the process and surface the material has interacted with. The clay’s fleshy diluted colours and hardened form are reminiscent of masticated chewing gum, eliciting a visceral response from the trace of some form of human interaction with the material.

These subtly coloured pieces of polymer clay are delicately formed; they reveal the imprints of a textured surface. Hinkley makes textured plaster casts which the clay is then pressed into, resulting in a reversed embossing. His handmade process is meticulous. Conceptually, the making is as important as the finished sculptures are – it reveals the imprecision and irregularities of the handmade. As an exercise in looking, Hinkley’s sculptures allow us to consider small details we may often pass over.

Hinkley’s practice shows an ongoing interest in intricate and uncanny objects which challenge a viewer’s sensory and perceptive engagement. With this series of untitled clay objects there is the sense that because they have absorbed a mark rather than left an imposing presence in a site, stumbling across them is a chance encounter that may not be available again.

In 1768, naturalist and founder of modern geology James Hutton (1726–1797) presented his findings on the processes of geological change. He described a dynamic Earth that was being perpetually formed. This contradicted commonplace biblical notions of the Earth’s creation. The cycle in which rocks are forced upwards by volcanic activity, eroded by natural forces and returned to the sea in sedimentary formis not an ancient process but is actively occurring in the present day with ‘no vestige of a beginning, no prospect of an end’.

It is this continuous cycle of destruction and renewal that Nicholas Mangan explores in his video work A World Undone, 2012. Mangan takes possibly the oldest geologicalmineral on Earth, zircon crystal, a 4404-million-year-old substance found in the Jack Hills region of Western Australia, and crushes it into granular particles. A world undone captures the zircon dust floating against a black backdrop, reminiscent of footage of meteors in space. Filmed in high-definition, A World Undone is a mesmerising and beautiful work that is dislocated from any recognisable context of time or site, further emphasised by the black void-like setting and the film’s continuous looping.

In this work, Mangan creates a visual correlation between the macro and the micro, temporarily destabilising our perception of size. At first, the floating primordial material evokes familiar footage of galaxies; this brings to mind the sheer depth and magnitude of space, and the incomprehensible notion of how we are situated within it. Mangan’s hyperreal and hypnotic filming technique adds to the reading of this work as a snapshot of a mysterious space voyage, which we try to understand with our part-fact, part science-fiction knowledge of the universe.

Mangan’s physical and ultimately destructive intervention with an ancient material challenges ideas of longevity and alludes to an underlying human desire to affect the forces of nature and leave a mark on Earth. The implications of this are poignant today when we are seeing the negative effects of global warming due to humankind’s technological advancements, and our dependence on the environment for natural resources which we extract through extensive mining.

With A World Undone, Mangan cleverly destabilises our concepts of space and time. As is true of his multidisciplinary practice, he draws on cultural, scientific and historical issues, creating a hybrid discussion which collapses the expanse of time separating the deep past and present.

Peter Robinson’s sculptural work Ritual and Formation, 2013 creates a dazzling and disorientating visual experience while evoking ritualistic objects and celebrating a process-based engagement with materiality. A collection of aluminium poles, uniform in height, are threaded with various sizes of black, white and grey felt circles. The felt layers build up an undulating texture that differs in thickness, while the striped bands, visible as the viewer approaches the work front-on, form a random and interminable pattern. The felt configuration is reminiscent of barcodes, images of DNA assays or QR codes for smartphones. There is the sense that Ritual and Formation contains a complex language and verification system we must scan to understand.

The relaxed lean of the poles against the wall seems to suggest they have been held, used and are resting, waiting for someone to pick them up again. However, their uniform placement and the near-even spacing between each pole also makes them appear like structures that fortify or support the wall. The process of searching for a familiar or recognisable element within a work like Ritual and Formation is an important aspect of artwork–audience interaction: the work invites multiple readings and generates engagement.

Robinson’s previous sculptural installations, such as Snow Ball Blind Time, 2008, have filled large gallery spaces and physically overwhelmed audiences with their magnitude and material presence. In contrast, Ritual and Formation is an optically stimulating and prodigious work that seems to shimmer and transmute as you approach it. Like Bridget Riley’s hallucinogenic Op Art paintings, the felt stripes warp and move as your eye tries to distinguish where the pattern stops or starts. Our perception of depth, space and movement is further confounded by the carpet of felt circles, the remnants of Robinson’s making, which are scattered across the floor underneath the poles. The optical illusion of Ritual and Formation is heightened by this carpeting – the felt circles negate the corner where the floor and wall meet and blur the transitional space between the poles and the floor. The discs also create a barrier that separates the audience from the poles; and they allude to Robinson’s process of making. As with his polystyrene Polymer Monoliths, 2009, the production leftovers gather around the finished work. This seems to encapsulate, in a humorous fashion, the romantic notion of a sculptor taming a raw material, removing the excess, and revealing the finished product hidden inside.