Djirrirra (also known as Yukuwa) assisted her father, Yanggarriny Wunungmurra (1932-2003) in his Telstra Award winning painting of 1997 and continually up until his death in 2003. She has also assisted her brother Nawurapu Wunungmurra, but now primarily paints her own works. Her father granted her this authority whilst he was alive. Her precise hand and geometric style has increasingly attracted enthusiastic interest from the art world. As she came to the notice of Buku-Larrnggay co-ordinators for her exquisite hand and innovative composition she was included in her first major exhibition and her first visit to the world outside of Arnhem Land, in a show at Raft Artspace in Darwin in 2006. In 2007 she was selected for Cross Currents, a major art survey at the Museum of Contemporary Art in Sydney, and in 2008 won the TOGA Northern Territory Contemporary Art Award. From here she was invited to her first solo show at Vivien Anderson Gallery in 2009. In 2012 she followed her father and brother as a Telstra Award winner.

She has lived at the remote homeland of Gangan since she was born in 1968 (before Western housing was erected) and has three children. She has exhibited in the US, China, Australia and New Zealand. From 2013 she has extended her use of media beyond naturally occurring ochres and bark to include recycled found industrial waste materials such as MDF and perspex louvres. In 'Black and White' at Outstation Gallery in 2017 her lyrical Yukuwa (yam) inspired paintings on board featured in collaboration with an installation of her brothers Larrakitj. Yukuwa is one of the personal names of the artist and Yukuwa has become a distinct theme in her practice. This motif first arose when she had been challenged about her right to paint Buyku, the fishtrap imagery of her own clan and homeland by a family member. Rather than argue, she retorted by painting imagery which in one sense is her own personal identity.

Text courtesy of and adapted from Buku-Larrnggay Mulka Centre and Tim Melville Gallery. 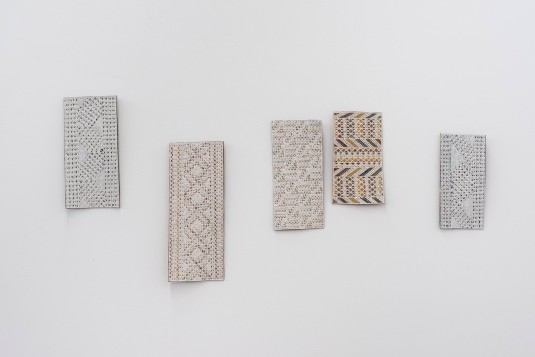